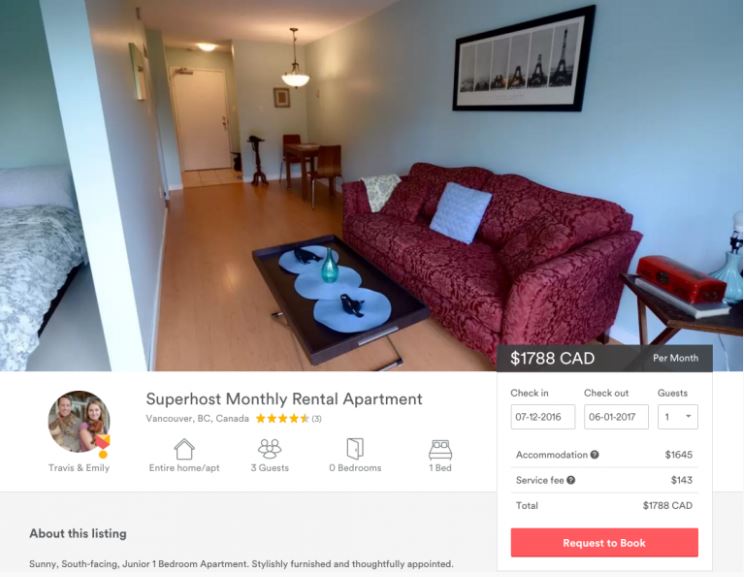 The City Of Vancouver is still recovering from the introduction from many acts, taxes and increases when Airbnb has upped the ante by offering new hosts a $250 signing bonus. But, the catch remained that the hosts have to sign up by August 31, be located within 25 miles of downtown Vancouver and have had a minimum booking of $100 per night to avail the offer The short-term rentals market so dominated by Airbnb, Flipkey and VRBO has been viewed as controversial as the housing is taken away from locals to be rented to tourists. The rentals also assist in getting around the empty-homes tax. The B.C. government earlier this summer passed legislation to allow Vancouver to create such a tax.  Many Real Estate experts believe that such a tax will be ineffective because of the proliferation of short-term rental companies. The homes may just be listed for an entire year but be booked for only 2 nights and is listed as not vacant which gets it around the said tax.

Airbnb hosts also do not collect a hotel tax, which is an advantage for consumers but is putting a lot of hotels out of business.  The City of Vancouver earlier this summer contracted a third-party consulting firm to examine 10 platforms that provide short-term rentals in Vancouver with the aim to determine how these companies have and will affect the availability of rental housing and the loss in taxes as well. In conclusion, the short-term rental companies have witnessed a significant amount of revenue and have also been successfully been able to evade the taxes, but the future will only tell what is in store for them.